Seriously? Subscription brands still use direct mail?! Hey, it’s a fair question. We get it all the time. So let’s address the elephant in the room… or should we say dinosaur? In today’s digital age, physical mail might seem like an antique. But make no mistake: The direct mail renaissance is upon us. And here’s why. Subscription marketers are under constant pressure to push the envelope in terms of growth and ROI. And yet for many of them, whether they know it or not, their existing marketing mix has reached a growth ceiling. It simply isn’t getting the job done at the speed or scale that their bosses expect, and certainly not at the speed or scale that will earn them a promotion anytime soon. This was the case for many of our clients before we engaged with them. Meanwhile, they had no idea there was an untapped and surprisingly cost-effective growth channel right under their noses, where throngs of richly targetable prospects were just waiting to hear from them. We’re talking, of course, about direct mail. So before you decide to sit this one out and let a massive growth opportunity pass you by, consider this: Today, our clients use direct mail to acquire hundreds of thousands of new customers every year, in some cases doubling their annual growth relative to digital channels.

The new e-book, “The Subscription Marketer's Guide to Direct Mail," gives you 12 telltale signs that direct mail could be the key that finally unlocks the explosive growth that your company has been searching for. In this "sneak peek" post, you can read the first two of those 12 signs. To see the rest, simply download the entire e-book for free.

All we’re saying is, if you want to rapidly grow your business, but aren’t yet using direct mail to help you do so, there’s a chance you might be tying one arm behind your back. Admittedly, direct mail couldn’t possibly make sense as an acquisition tool for all products and services on the face of the earth, so the million-dollar question becomes,

“Could my product or service work in the mail?”

Just to be clear, this e-book is not a sales pitch. Our goal is simply to present you with 12 indicators that have made many of our clients a good fit for direct mail, so that you can answer that million-dollar question before spending a dime on a test. (Though technically, when it comes to our clients’ top-line growth, that question has been worth in excess of $1 billion to date.) If the answer to that question is yes, our proprietary testing methodology and secret weapon, FaQtor Test, will make it work sooner and at greater scale than any other testing strategy in the industry. And if the answer is no, you’ll learn that sooner, too—and as inexpensively as possible. Throughout this e-book, you’ll be reading various anecdotes that zoom in on just two of our many success stories. Given FaQtor Test’s critical role in both the launch and sustained growth of all SeQuel campaigns, we’d be remiss not to explain the inner workings of FaQtor Test right away in section #1, to provide context for the reader moving forward.

Two blueprints for rapid growth in the mail 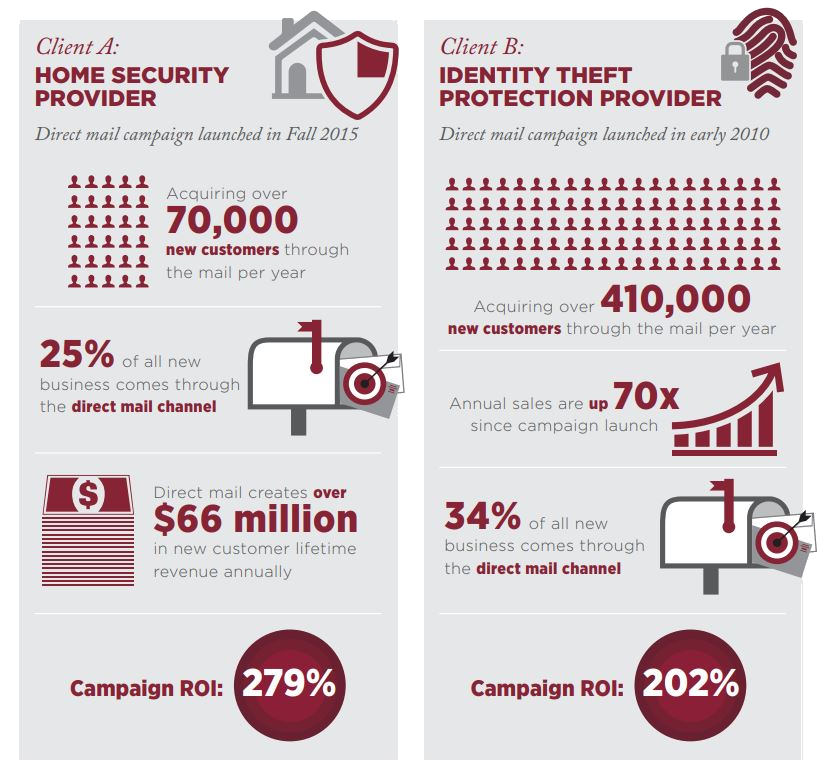 If your company could experience growth like that every year, how soon would you want to know that? Read on, for the answer lies in the pages ahead.

Indicator #1: You understand the value of testing

To mail tens (if not hundreds) of millions of pieces a year without first testing to figure out how to optimize that investment would indeed be absurd. But in all the work we’ve done for our clients, the single biggest determinant of success or failure has been the company’s overall attitude toward the initial test. The clients that have set themselves up to scale quickly are the ones that test broadly (multiple list sources, offers and creative concepts) in the initial test matrix, with the understanding that they’re mainly measuring the performance of their best test cell. If you’re willing to be patient in the initial test, that one cell will be critical in optimizing your campaign’s performance at rollout scale. Two testing methodologies that will make you want to rip your hair out If a direct mail agency presents you with a test plan that involves the words “A/B” or “multivariate,” turn and run as fast as you can. In the direct mail world, the A/B test is the definition of “checking a box.” You’re testing just one unique variable at a time—and you’re forced to hold the others constant, so that you can isolate the relative impact of the one variable you’re measuring. It’s straightforward and inexpensive, but it could take months or even years to find only minor improvements. 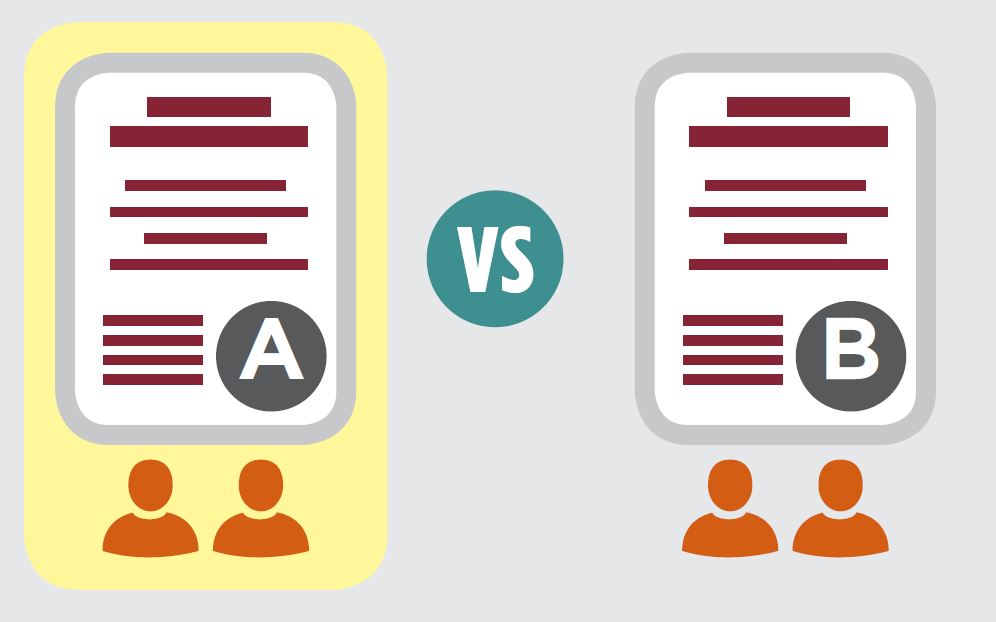 In the example A/B test matrix above, your control creative/offer/list combination is on the left (in yellow). You’re testing one unique offer (B) against your control offer (A), using your control creative (maroon) and control list (orange). A common alternative to the slow-moving A/B test is the full-scale multivariate test. By simultaneously testing many creative/offer/list combinations in a single test matrix, you greatly increase your chances of finding a winner quickly. However, it requires a far greater investment than you really need to make in an initial matrix.

The faster, cheaper, easier, less risky (and more scientific) way to maximize growth in the direct mail channel Sorry for the mouthful, but it’s all true. Our data scientists engineered FaQtor Test to give you the most possible learnings in a single direct mail test—at the smallest possible investment—so that you can be confident that the test cell you ultimately roll out is giving you the fastest possible growth at the highest possible ROI. We strategically structure the matrix in such a way that we can employ indexing and predictive analytics to find winning test cells that you didn’t have to pay to test. So whatever you invest in the initial test, you’re going to get an average of 400% more in terms of data and likelihood of success.

In this FaQtor Test matrix example above, you only need to test seven unique combinations against your existing control (top left), but through indexing, you’ll be able to measure the impact of all 35 unique potential winning combinations in the entire matrix. FaQtor Test is the perfect way to “dip your toe” in a direct mail test launch. You don’t have to pay for any of the indexed cells that might bring potential winners, and if those indexed cells lose, you didn’t pay a dime to test them anyway (and you can avoid wasting any money on them in the future). But FaQtor Test doesn’t just save you money—it increases the value of your investment. Every additional dollar you invest in the initial matrix will exponentially increase your chances of finding a cell that drastically accelerates your pursuit of maximum growth and profitability.

Case Study: BE FRUITFUL AND MULTIPLY

SeQuel’s strategists would consider an initial test matrix that populates eight cells at statistically significant volumes to be fairly robust. However, the leadership at Client A chose to populate 28 actual combinations in the initial matrix, which included 19 lists & models, various offers and a few creative concepts. (Through indexing and predictive analytics, that matrix generated 171 total combinations, or 530% more cells than they paid for.) On top of that, Client A wanted to mail about 4x more pieces per cell than what our strategists initially proposed.

The benefits of that aggressive initial test have been far-reaching and ongoing. Client A made the most of FaQtor Test’s predictive analytics, and thereby accomplished the equivalent of decades of A/B testing in a three-month test window. With the help of those invaluable early learnings and ongoing refinement, the campaign now drives thousands of sales every month.

Video: HOW FAQTOR TEST REVOLUTIONIZED DIRECT MAIL TESTING Did you know that SeQuel has used FaQtor Test to index the results for over 1 MILLION unique test combinations across countless industries? We’ve learned what works—and what doesn’t—so you don’t have to waste time or money learning those same lessons. At SeQuel, we’re certainly direct mail experts, but more specifically, we’re launch experts. There’s simply no other testing methodology on the market today that will optimize and scale your campaign as rapidly and cost-effectively as FaQtor Test. Click the video below to see how it works:

Indicator #2: Your company is already investing in brand advertising

Strategy for building market share isn’t all that different from military strategy. Air cover is great, but if you don’t have any boots on the ground that you’re supporting, what’s the point? Think of TV/radio advertising kind of like air cover. It’s a powerful display of strength, and certainly makes people pay attention to you, but you can’t advance on enemy territory in earnest without ground forces to do all the precise targeting. That’s where direct mail comes in.

Before Client B started using direct mail, it was investing heavily in TV, radio and digital, but those channels weren’t generating growth at the speed or scale that the company’s leadership expected.

The problem wasn’t limited to the fact that DVRs and podcasts were making it increasingly easier to skip over broadcast commercials. When you’re essentially creating an entirely new product category (as Client B did by selling identity theft protection), you really need to take time to educate the prospective customer on the category itself before you can help them see why they should buy your particular product. There simply wasn’t enough time to do all that in a digital display ad or 30-second TV/radio spot.

Direct mail, on the other hand, afforded the client far more time to tell that story. According to the U.S. Postal Service, Americans spend an average of 30 minutes reading their mail on any given occasion. Plus, a direct mail piece gives you a much longer shelf life than a TV/radio ad. If the prospect doesn’t have time to call right this minute, maybe they’ll take the letter and stick it on the fridge as a reminder. Then, when they have a moment to spare, they can re-read it, do some more research, and call the 800-number.

The bottom line is, all these channels need to work together for each of them to be most effective. Thanks to the investment Client B was already making in TV/radio ads, it had built up excellent brand recognition by the time the DM pieces hit mailboxes. Those marketing synergies also work in the opposite direction, too, as one in three people who become new customers each year (via all marketing channels combined) had received a direct mail piece soon before enrolling.

---------   Don’t stop here! Keep reading to discover ten more signs that you might be missing out on your biggest revenue channel.